Reliability Runs in the Family

No job is too big or too small for family-owned Gatlin Plumbing & Heating, Inc.

Gatlin Plumbing & Heating, Inc. is working on the Valparaiso High School natatorium project, one of the largest projects in Indiana in terms of ductwork and HVAC piping. Seen here, outside air and return duct for AHU-1.

Eighty-one years and counting. That’s how long family- owned and operated Gatlin Plumbing & Heating, Inc. has been providing reliable services to Lake and Porter counties in Northwest Indiana—an impressive legacy considering the many ups and downs the industry has seen over the last eight decades.

Founded in 1938 by Ivan and Marjorie Gatlin out of their garage, the entrepreneurial couple’s initial success led them to open shop at 311 N. Broad Street. The company eventually outgrew that space and moved to its present location at 1111 E. Main Street, where the nearly 60 employees (25% of which are family members) continue to provide premier plumbing, heating and underground services to the region.

Gatlin Plumbing & Heating is large enough to take on projects of any size but small enough to dedicate itself to surpass client expectations. In fact, whether it’s a small residential space or a big multimillion dollar project, no job is too big or too small.

The Gatlins (second, third and fourth generation family) still run the show today, led by company President, Randel Gatlin, Ivan and Marjorie’s son; daughter, Clara Murphy, who is Secretary Treasurer; grandson and Vice President Mathew Murphy; and Greg Borden, a great-grandson, who is one of the directors. They are supported by nearly a dozen other family members and other experienced employees who are part of the team.

The company started out doing a lot of plumbing and underground work, including sanitary, sewer and water, which remains among its major areas of expertise. The company also specializes in plumbing and heating services for hospitals and schools as well as underground services for state work. Gatlin Plumbing & Heating now does sheet metal, a new area that it started approximately three years ago; as well as implementing an HVAC Commercial Service Department this year.

Clara Murphy speaks with great pride about one big differentiator that sets Gatlin Plumbing & Heating apart. She shares, “Aside from the dedication that naturally comes with a longstanding family-owned business, I would say we have a soft spot for older people. We have a very small residential department, and we could easily give that up but we won’t because most of the people in that market are elderly. We try to take care of those customers who have been conscientiously involved with us and still call upon us and depend on us. We don’t want to give them up—or give up on them.”

That level of customer care is something that has been a part of the Gatlin business from the start. Clara relays an interesting story that when the company started out, it was comprised of all family—the owners’ kids and relatives. The way they added to staff was when someone from the town was in jail and had a family, the sheriff would call Ivan and ask him to help people get back on their feet. “Some worked out, some didn’t,” Clara quips.

This ties into the family’s business philosophy, which Clara describes by saying, “We like to inspire people to make a clean and healthy positive change in our business world and the outside world.” Gatlin Plumbing & Heating is a union shop that honors service to the country by hiring military personnel and veterans. As a testament to the positive way they approach their business, this year the company earned The Governor’s Half Century Business Award, which honors Indiana businesses that have remained in operation for at least 50 years and have demonstrated a history of community service.

Gatlin Plumbing & Heating has also maintained great relationships with its suppliers over the years, always paying on time, a trait that has helped earn them their excellent reputation. Additionally, they stock a lot of inventory of pipe and supplies in their yard. Clara says, “We actually have suppliers call us if they’re out of something. We’ve been around so long that we have older things others don’t have. We’re not a supply house but people still call us when they need something.”

The award-winning company has managed to survive where others couldn’t—boosted by quality work, impeccable service and knowing when to back off and when to move forward. A few years ago, Matt garnered an award for Project of the Year by the Construction Advancement Foundation (CAF) for a public works project, and the company is currently working on an underground project—the Valparaiso pool project, one of the largest projects in Indiana in terms of ductwork and HVAC piping.

Between its strong community roots, diversity of residential and commercial work, and an unwavering dedication to its customer base—new and old—Gatlin Plumbing & Heating stands poised to take on any challenge that comes its way.

A Family Business Paves the Way

Randy Cliff, the founder and owner of Cliff’s Asphalt Specialist, learned from the best mentor—his…

The legacy and scope of ABC Warehouse, a major appliance and electronics retailer, continues…

The husband and wife team of Milan and Damaris Jara, the Co-Founders, Owners and Operators of… 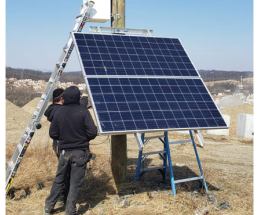