No Compromise on Quality

Bill Johnson, Manager of National Property Consulting & Management, LLC (NPC&M), is comfortable with aggressive project schedules. “We get in and get out. We’ve never missed a deadline, and we do what it takes to get the job done on time and within budget,” he says.

Headquartered in Mont Vernon, New Hampshire, NPC&M provides general contracting and construction management services to commercial and industrial customers across the U.S. “We do quite a lot of renovation projects for nationwide supermarket retailers like BJ’s Wholesale Club, Shaw’s and Hannaford,” Bill says.

Whether a multimillion-dollar project or a $2,000 assignment, clients can expect the same level of service. “We’re a smaller company, and we are just as appreciative of a small job as we are our larger projects,” Bill says. “We work hard no matter the size of the job. We conduct ourselves honestly and ethically, and we don’t accept substandard work from our employees or subcontractors.”

And if something goes wrong, NPC&M accepts responsibility and works to resolve the issue as quickly and efficiently as possible. “We don’t claim to be perfect. If we make a mistake, we own it and make things right,” Bill says.

With a team of 25 employees, NPC&M keeps overhead costs low, passing that savings on to customers. “We don’t offer a luxurious office within an ivory tower,” Bill says. “Our pricing is the same whether it’s one project or 20 projects, and we don’t mark up costs when we get busy. Customers get consistent pricing, always.”

That level of respect extends to NPC&M’s full-time employees as well. “We never forget where we came from—all of us started on the bottom of the ladder—and we never put ourselves above another person. Whether someone sweeps floors or is a project manager, each person is equally important and brings something to the team,” Bill says.

Bill knows about starting at the bottom of the ladder. While a senior in high school, he got his first construction job working for an electrical contractor. “They needed someone to do drafting. I knew nothing about the industry.” Within a few months, the owner thought Bill had what it took to be a project manager and estimator. “They trained me, and I had the opportunity to work on a wide variety of commercial projects,” he says.

Bill spent a number of years working for various electrical contractors, often managing supermarket construction and renovation projects. “We did a lot of work for Shaw’s, and I was eventually hired as the supermarket company’s Manager of Engineering,” he says. Bill spent the next 10 years managing the engineering efforts of planned construction projects for the company’s 220 stores across New England.

In time, Bill drew the attention of a real estate developer, who hired him as Vice President of Construction. “I helped to build shopping centers around the country,” he says. When the Great Recession hit, Bill found himself out of work for the first time in his life. “In nearly 25 years, I’d always had someone waiting and willing to hire me.”

Faced with having to file unemployment, Bill made a pivotal decision in 2008. “I remember coming home from the unemployment office and facing my wife. I told her I made the decision to start my own business—that we didn’t need a lot to survive. My feeling was that when you’re already unemployed, you can’t fail; you can only go up.”

Starting with nothing, Bill began pounding the pavement and in his first year brought in $750,000 in business. “I’d met a lot of good people around the country in my years in this industry, and my word and a handshake meant something. It still does today. We’ve never done any marketing. I’ve generated all our sales through networking, customer referrals and word-of-mouth.”

The company not only gets new clients through word-of-mouth referrals but also attracts talented employees. “Our workers speak well of us, and people want to work for our company,” Bill says. “We take good care of our employees, and family comes first. That’s something employees appreciate.”

NPC&M rewards employees with year-end bonuses based on performance and effort, and Bill often gives time off to superintendents at the end of an assignment. “I want to give them a week or two to spend with their families before they start back up on another job.”

Employees are grateful for the time off and for the ways Bill expresses appreciation. “Recently, we were closing out a job in upstate New York. The client loved our superintendent and was so impressed by his work. On the way to the site, I bought a $500 Visa gift card for the superintendent. When I gave it to him, thanking him for his effort, he said he was just doing his job. I told him, maybe so, but he did a great job and that doesn’t go unrecognized.”

Bill goes to great lengths to make sure personalities align on projects, too. “We match employees with customers, knowing some will work best with certain clients,” he says.

Whether working near home or in another state, the company always tries to hire local subcontractors. “They know the community and building officials and understand the nuances involved in getting work done locally,” he says.

Work is often done at a heightened pace, according to Bill. When Mattel called on NPC&M to renovate a 1million-square-foot distribution center in Pennsylvania, the company had just 40 days to complete the assignment. “We laid down thousands of miles of line striping, installed new signage and bar scan infrastructure and installed thousands of feet of warehouse racking,” Bill says. With the warehouse already in full operation, the team developed a strategy for relocating existing product to accommodate project work. “We managed three different subcontracting companies and ran double shifts to get the project done on time,” he says.

When the weight from 10 feet of snow collapsed the roof of a BJ’s Wholesale Club in Hamburg, New York, on the day before Thanksgiving, Bill packed his suitcase for an emergency onsite meeting with the store manager, district manager and building inspector. “They were waiting for my arrival,” Bill says. The company was tasked to complete work as quickly as possible. “The client told me I had his checkbook and that he had complete trust in me.”

The NPC&M crew first performed a controlled collapse of the damaged roof, then set to work repairing the structural damage and renovating the store’s interior. “Our crews ran 24/7, with the exception of Christmas and New Year’s Eve. We did $10 million of work in just 10 and a half weeks,” he says.

Whatever the project, NPC&M steps up to the plate—even if the job is not exactly construction related. “Mattel’s Senior Vice President of Distribution called me in July 2020. He said, ‘You’ve pulled a lot of rabbits out of your hat, and we need your help with our Pennsylvania distribution center.’ Due to COVID-related employee shortages, the distribution center had inbound freight backed up by 700 trucks, and they couldn’t get their outbound freight out. We provided a staff of 130 at the high point to serve as forklift drivers, assist with outbound freight and offload inbound freight. The assignment started out as just six weeks, but we ended up helping them out through the end of the year. In fact, the subs we hired were so good they had us train some of their own employees. They were setting production levels within the warehouse that they’d never realized before."

“We know we’re not a placement agency, but we do whatever it takes to help our customers,” Bill continues. “That’s the difference with our company. We get the job done, we take care in our work and we operate with honesty and integrity, always.”

A family business that can span more than four decades is obviously doing something right. That’s the story of Kingst... [Read More]

The old saying that it’s what’s on the inside that counts has never been more true than for the professionals at Clea... [Read More]

There’s a new partner on board at LJS Waterproofing, LLC (LJS), and she is reinvigorating the six-year-old waterproof... [Read More] 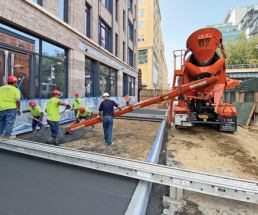