The crew functions like a family and demonstrates friendship and a teamwork approach as seen here while completing a paving project for Freddy’s Frozen Custard & Steakburgers in Hatfield, Pennsylvania.

Following a dream and fueled by ambition, Orlando Canales moved to the United States in 2006 from El Salvador. New to the country and at the impressionable age of 15, he had a chance meeting with a man (Michael Harris) at a baseball field who asked Orlando if he was interested in a summer job. Excited, Orlando accepted, and his journey into the driveway and paving industry began.

“I worked with my boss every summer for three years,” Orlando says. “In 2010, I finally graduated high school and started working for him full time. He taught me everything I know about this industry. I started with a shovel and worked my way up, learning every aspect of what it takes to be a paving contractor.”

But Orlando wasn’t limited in his ambition and always dreamed to one day have his own paving truck. In 2014, after much prayer and, according to Orlando, as ordained by destiny, he purchased a truck and founded HD Paving and Sealcoating LLC. The company, based in Lansdale, Pennsylvania, provides asphalt and stone paving, sealcoating and pavement management, concrete services (including sidewalk, apron and curb and pavers) and snow removal.

The Journey of a Thousand Miles

When Orlando moved to the U.S. almost 15 years ago, he made a pact with God. “I told God that if I move to the United States, I am going to serve Him. When I started my business in 2014, I felt drawn to do it because I knew it would change my life, and in turn, change my family’s lives. For me, it was about thinking deeply about how I could make a difference while serving God.”

What a difference he has made, too. Since forming HD Paving and Sealcoating, Orlando has grown the business in both revenue and staff. Orlando, who serves as the company’s President and CEO, is joined by his brother, Gustavo, who is Vice President. The company has 12 permanent staff members, though the number of employees fluctuates by seasonal demands, and touts big-name, national clients such as Target, The Home Depot, CVS Health, and Marriott International.

However, it was a local project that had the largest impact on Orlando. “I met with the Renaissance Philadelphia Airport Hotel a few years ago. The project was 45,000 square feet, and we had never completed a project of that size before. Being able to compete and win this project and perform it with quality gave me confidence to know my business was legitimate and would continue to grow.”

Orlando says that today his company is one of the most well-known and respected paving contractors in Bucks, West Chester and Montgomery counties in Pennsylvania. In fact, HD Paving and Sealcoating was awarded Best Paving Contractor two years in a row, in 2018 and 2019, from a local awards program in Hatfield.

Passion for the Work

The majority of the company’s projects are commercial, but it is not the industry Orlando cares most about—it’s the type of service he provides. To him, paving is the most enjoyable. “I love paving—it’s my thing. I can be a teacher because it’s the little things that make a parking lot beautiful.” With those details and care for the work in mind, HD Paving and Sealcoating recently embraced the tagline “Smooth Paving for Smooth Rides.”

As a focal point of any property, a driveway or parking lot can often be overlooked, unmaintained or, worse, nonfunctional. “I love when you arrive at a job and it’s a mess. You can have the most beautiful house, but if the paving is not done correctly, then the whole property looks bad. Paving is a necessity, and it requires perfection and expertise to get it right,” Orlando says. Many may aim for perfection, but for Orlando it’s the ultimate sign of a project completed properly. “I have to show my staff how to perform the job right and with precision. If you only care about the money, then it’s going to show in the end.”

Orlando takes pride in his work, and it’s evident in everything he does—how the company fleet is maintained, how his crews leave a job site, the manner he presents himself in a business meeting. He always puts his best foot forward. “To me, it’s about bringing innovative and new technology into the paving industry,” he says. “I want to change the game.”

Orlando is quick to name the driving force for his success. “My family is my motivation. I want to build a safe future for them. I see my company three generations from now, not two to three years from now.”

Explaining the family connection further, he says, “I have cousins, brothers and brothers-in-law in this business already. And, I just got married. That’s why I want to build this company the right way, because there are many people I am taking care of and I want to leave a legacy.”

Oscar Garcia, who works in the front office at the company, says, “I knew Orlando from church and asked him if he had an internship for me last year. I joined the team, and after I graduated, he offered me a position. The crew is a great group of guys who enjoy what they do beyond a paycheck, and we function more like a family. As a Christ-centered business, they demonstrate love for one another, friendship and companionship.”

Faith Above All Else

Orlando is a spiritual person, and that influences how he runs his business and performs his work. On the back of his company’s fleet of trucks is a paraphrased verse from the New Testament: “Jesus is the way, the truth, and the life.” John 14:6. This verse captures Orlando’s commitment to faith. “I believe the Gospel is real and every day is a new day to serve God.”

He recounts a recent incident. “I saw two women stopped on the side of the road with a toddler. I stopped to ask if they needed help. They said their son is sick and can’t be in the heat.” Orlando was compelled to offer to drive them to the hospital when an ambulance pulled up at the scene. “Even though an ambulance pulled up, the women said they wanted me to drive them, so I did without hesitation.”

Orlando’s warm, friendly and open personality makes people feel safe with him in both personal and work-related situations. “My job is to motivate my people,” he says. “I know when my guys are tired while working in the heat. That’s why I show up. I want to show them my support, show them we are family.”

Tiffanie Reynolds is a marketing and public relations professional in the AEC industry serving firms ranging in size from 100 to 22,000 employees across the globe.

Finding the right insurance and risk management solutions is a challenge for everyone, but given…

With a foundation built on respect, integrity, honesty and responsibility, it’s no surprise that…

Safety is No Accident 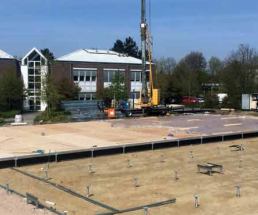