No matter how complicated a construction project might be, it can be simplified by examining it in terms of its smaller components. This approach is used to great effect by Doug Beatty, the Owner/Operator of Beatty Construction, Inc., a general contractor based in Austell, Georgia. The company provides commercial construction, general contracting and construction engineering services throughout the metropolitan Atlanta area.

For Beatty, problem-solving is the key to completing construction projects successfully. To tackle more complex jobs, Beatty Construction, Inc. breaks them down into “things we can touch and see,” Beatty says.

He likens each manageable task of a large construction project to a grain of sand within a liquid. “Don’t look at the big picture to resolve a problem,” he advises. “Boil it down to the grain of sand. If you can get there and understand the issues at that level, then everything else builds on top of that.”

Of course, such a process benefits greatly from experience. Although Beatty Construction, Inc. was formed in 2000, its leaders have been in the construction business much longer than that. For example, Beatty and Scott Schroeder, the company’s Senior Estimator, each has more than 40 years of experience in general construction.

In the right hands, experience becomes expertise, as previous lessons prepare the foundation of knowledge. “Construction is an ancient craft,” Beatty says. “Very seldom do we run across something that’s never been done before.”

This expertise pays off in the field, particularly on projects when time is of the essence. For example, Beatty Construction, Inc. frequently works for the Metropolitan Atlanta Rapid Transit Authority (MARTA). Because of the busy nature of the transit system, access to job sites is often limited.

“Time is such a precious commodity when you’re working on the MARTA system,” Beatty says. On some projects, Beatty Construction, Inc. may have only eight to 32 hours in a month to work on-site. As a result, the company must maximize every opportunity to complete the job as efficiently as possible.

For such projects, Beatty Construction, Inc. carefully develops and implements a work plan, while making sure to change the plan as the need arises. In the field, the actions of the staff are analyzed with an eye toward increasing efficiency as much as possible. “We watch our staff perform, almost like an industrial manager watching production in a factory,” Beatty says, particularly when it comes to repetitive processes required for a project. “It’s almost like a Ford assembly plant. There are always better ways to do something.”

In addition to expertise, Beatty Construction, Inc. benefits from the close working relationship between Beatty and Schroeder, the latter of whom has been with the company since 2005. However, the pair have known each other since the early 1990s, when they worked together at a previous company.

Over the years, the two have forged a relationship built on trust, Schroeder says. “If there’s one thing that Doug knows, it’s that if he ever asks me a question, regardless of what the outcome would be to me, I always tell him the truth,” he says. “I don’t have the ability to lie.”

For his part, Beatty lauds Schroeder’s estimating abilities. “The vast majority of our work comes through the competitive, hard-bid market,” Beatty says. “To be successful in that market, you have to have somebody who can see two-dimensional drawings in three dimensions and properly estimate them. Estimating is more than just looking at drawings and counting. You have to know how things go together.”

Beatty and Schroeder also share similar views on the overarching need for complete honesty in their business dealings. “Your reputation and integrity are what separate you from the other general contractors of your size,” Beatty says. “It makes you stand out.”

Schroeder agrees. “Integrity is the biggest part of construction,” he says. “If you’ve got integrity, everything else can work itself out.”

Beatty’s own experiences in construction have informed how he runs his current business. For example, in his early career he spent much time on the road while working for other companies, often having to live away from his family for long stretches at a time. When he formed Beatty Construction, Inc., he did not want his staff to endure something similar.

By limiting its service area largely to the Atlanta metroplex, Beatty Construction, Inc. ensures that its 10 employees do not have to live apart from their families. “We try to stay within two hours of downtown metro Atlanta,” Beatty says. “I want staff at their homes every night, rather than living in hotels or temporary housing.”

Although that decision limits the extent to which Beatty Construction, Inc. can grow, the company owner is fine with that. “When I started, I said, ‘I don’t want to be the biggest in Georgia, the biggest in the southeast, the biggest in the country,’ ” Beatty says. For him, the main goal is to do top-notch work for his customers while also accommodating the needs of his staff.

That said, Beatty Construction, Inc. recently formed a new partnership intended to foster additional growth. In 2018, the company entered into a legal joint venture with another contractor team, Kissberg/Parker Fry JV, LLC. Based in Stone Mountain, Georgia, Kissberg/Parker Fry is recognized by the city of Atlanta as a minority-owned or disadvantaged business.

“With the joint venture, we were able to expand our project size without the additional capital that Beatty Construction, Inc. otherwise would have had to raise,” Beatty says. Now, the company can obtain payment and performance bonds for projects valued at $10 million or more. “That’s the biggest thing that the joint venture has allowed us to do,” he adds.

To date, the joint venture between Beatty Construction, Inc. and Kissberg/Parker Fry has completed two projects and is currently working on a third. The business partners intend to bid on future projects from the city of Atlanta that are open to pre-approved contractors.

Ultimately, Beatty would like to see general contractors work more closely with project owners to iron out potential problems before they occur during construction. “We would like to be able to consult with the end users of construction, to help them save money on the front end,” he says. “It’s cheaper to solve a problem on paper than it is when you have staff waiting outside and the clock’s running.”

Construction documents, for instance, are not always as complete as they need to be, leading to eventual problems in the field, he explains. Once construction begins, “the cat’s out of the bag and the dollars are being spent,” Beatty says.

The delays and expense that result from such situations could be reduced or even eliminated if general contractors were asked to provide input earlier in the life of construction projects, Beatty says. “The red-headed stepchild in the construction industry is usually the general contractor—not the owner, not the architect and not the engineer,” he says.

As an example, Beatty cites an interior renovation project that his company worked on. Problems arose with the fire alarm system, and the architect and engineer were tasked with resolving the issue. However, the client had difficulty providing the technical details needed to solve the problems. Faced with this situation, Beatty Construction, Inc. turned to a fire alarm company with which it had worked before. “We brought in a fire alarm expert who could investigate and solve the problem,” Beatty says.

Ultimately, Beatty Construction, Inc. is a problem-solver above all else, Beatty says. “I like to say, ‘No matter what the problem is, all problems are the general contractor’s problem,’ ” he concludes.

For nearly two decades, writer and editor Jay Landers has specialized in reporting on design, construction, and infrastructure issues for major publications.

Working From the Heart

It would be an understatement to say that Dawn Janho, Owner of Wild Heart Industries, LLC, a… 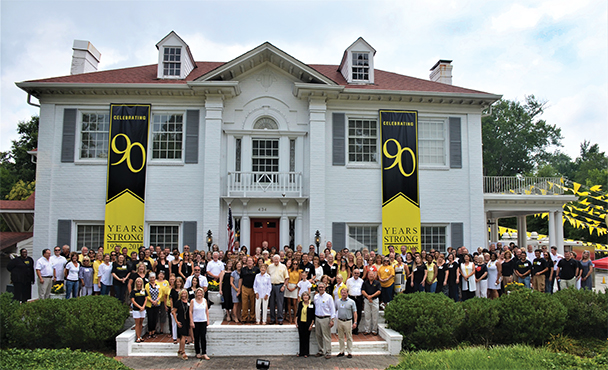 You don’t stay in business for 90 years without doing things right. The Norton Agency, one of the largest independent... [Read More]

Running a family-owned business is no small feat. But staying in business for more than 40 years is remarkable, espec... [Read More]