Ron Hudson is the first to tell you that he hardly imagined himself as the man who would one day head an industry-leading, $68 million gross revenue construction services company. In 1976, when Ron was 26 years old, he says he started Superior Wall Systems, Inc. with just $1,500 and an old pickup truck. The entrepreneur had never even finished high school.

Back then, the fledgling company began by servicing a limited number of general contracting clients. Over time, the company has grown in size and sophistication, and today it serves developers, owners and general contractors throughout Southern California.

Ron, who is President and CEO, says his Fullerton-based firm is one of the fastest growing companies in Orange County, California, and also one of the safest.

“We know the value of good safety habits, and every one of our leaders and workers embrace these practices,” Ron points out. “Our people need to know they can go home at the end of each day without injuries. We make sure workers know to protect themselves from work hazards and remember that we can’t take chances with safety to achieve a speedier work process.”

He’s pleased his team has one of the lowest Experience Modification Rates (EMRs) in his industry, noting that Superior Wall Systems’ EMR is 65-66%, a range that is considerably lower than average. This good rating means his company pays lower workers’ compensation insurance premiums.

“A lower premium equals lower field costs, and so we can pass this savings along to clients,” Ron says. “This definitely gives us a competitive advantage.”

Superior Wall Systems made its mark in the high-rise tower market with its framing, drywall, insulation, fire-stopping, sheathing, air barrier, and lath and plaster work in one of three towers in Metropolis Los Angeles. Encompassing an entire city block, Metropolis is a collection of residential towers, sky parks, pools, restaurants and an upscale hotel that is located in the heart of downtown Los Angeles. The overall project began in 2014 and was completed in 2018.

“Our work was in the tallest tower, which is 43 levels above grade, and we were one of three subcontractors used on the towers for this massive project. Since there were three of us, the contractor could measure our work, compare our finishes and observe what each of us did to bring the work in on time,” Ron says.

Prominence in the Prefab Market

According to Ron, another high- profile project was the MonteCedro Senior Living Community in Altadena, which is the largest prefab senior living project in the country. The work helped establish Superior Wall Systems’ Prefabrication/Panelization division as a leader in the off-site construction market in California.

“The project has about 400,000 square feet of living space,” he explains. “Overall, we manufactured and installed more than 5,000 prefabricated light gauge structural frame panels. The work was highly detailed and complex.” He elaborates: “We started fabricating the panels five to six months before delivering them for installation. By making them in-house and not in the field, we had greater control and could ensure accuracy. As a result, we didn’t have any change orders since we could address all questions before installation began.”

SWS Panel and Truss is the company’s panel company subsidiary that is housed in a 110,000-square-foot factory. The panel company began eight years ago, and Ron says it is the longest lasting panel company in California history.

Another key to the project’s success was the company’s use of Building Information Modeling (BIM) and design assistance. BIM is a 3D model-based process that architecture, engineering and construction professionals use to digitally test concepts and strategies to more effectively plan, design, construct and manage buildings.

Superior Wall Systems also earned accolades for its framing, drywall and lath and plaster work on the renovation of Christ Cathedral that was completed in July 2019. The glittering glass church, originally known as the Crystal Cathedral, in Garden Grove, California, was once host of the popular “Hour of Power” television show that broadcast sermons around the globe. The cathedral was purchased by the Diocese of Orange and renamed Christ Cathedral after undergoing a $72.3 million renovation.

“Our work was particularly challenging because there were so many variables. We had to take time to figure out how we were going to approach what they needed each day. We had to care about it,” he says. “We were able to provide a lot of input to the general contractor and, therefore, enjoyed a good working relationship.”

“You know, you only get one chance to prove how much quality means to you,” he adds. “This truly was a one-of-a-kind project.”

Growing an Employee Base Organically

Ron explains that attracting and retaining talented workers is a universal challenge in the construction industry. He is proud that many of the company’s workers are 20- and 30-year employees—and some are even third-generation family members.

“There is a shortage of manpower, and the industry is competitive for workers in this market. We’ve got good people in the field, and we try to hang on to them,” he says. “We are careful when expanding to ensure we can find the best workers. We like to grow organically by reaching out to our workers’ friends and relatives. We want them to like the whole picture of our company and see how well we work together. Our team is beyond passionate and excited for work each and every day. Our clients appreciate not only our dedication to making their project a success, but how much we enjoy what we do.”

Ron is most excited about a newly implemented philanthropic program for employees called the SWS Warrior Program that began in April. After the pandemic began to take hold, the company awarded each of its more than 400 employees $1,000. Workers could keep half for themselves but had to give the other $500 to a needy family or worthy charity.

“Then, we asked them to post what they did on our company website so that everyone could feel a real sense of community by learning about the impact these gestures were having,” Ron says.

In August, the company began the second phase of the program by asking employees to go out on their own into their communities and do acts of kindness to help others. Ron says employees are submitting information about what they’ve done in order to be considered for Warrior of the Month recognition. Winners receive $1,000, a warrior jacket and recognition on a plaque. At the end of 12 months, all of the winners will be entered in a drawing for a $5,000 prize.

“Recognition is huge for our people and they also value knowing they are a part of something bigger than themselves. We’re hoping our program will inspire other contractors to start something similar,” Ron says.

“A program like this helps show our employees what this company stands for, and that we care about them and want to inspire them.”

Ron also is proud of the fact that there has never been a mechanics lien filed by a supplier or subcontractor on any of its projects in its 44 years of business. Four decades after founding Superior Wall Systems, Ron and his team continue to be passionate about their work and collaborative spirit, and they remain committed to safety and quality. The company is building on these key attributes while demonstrating the value it places on fostering good relationships with employees, clients and the community.

Ben Wheatley is a public relations and marketing executive who has worked as a newspaper reporter and photographer. 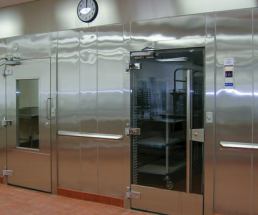