The Ypsilanti, Michigan-based company bills between $5 million and $7 million each year, spending about 90% of its time on commercial work and the remaining 10% on residential. Ryan serves as CEO and General Manager, and Dave is Vice President, Estimator and Project Manager.

Ryan has been around construction most of his life. Early in his career he chose the challenges and rewards of excavation as his specialty. Who wouldn’t want to play in the dirt with big “toys,” as he puts it? Ryan has been in the excavation business for more than 26 years; before starting Diversified Excavating, he was the primary operator and excavator for another contractor.

Ryan’s cousin Dave grew up in the excavation business, working for his father until 2011, when his dad announced his retirement. The timing was perfect, as Ryan was considering commercial jobs as his primary focus.

“I did some side work for Ryan,” Dave says. After a couple of jobs and a casual meeting over beers to discuss the future, the cousins decided “we can go a long way with it.” In 2012, they earned $265,000 in sales, mostly with residential work such as digging earth for basements.

Then in 2013, they earned a job with Bloom General Contracting, Inc., based in Redford, Michigan. “Owner Alan Bloom and his staff have continued to send us work and great projects over our long-term partnering,” Ryan says. “They have been a big part of our growth and combined work in the commercial field.”

Within the next couple of years, Dave and Ryan heard from Douglas N. Higgins, Inc., a general contractor based in Ann Arbor, Michigan. The general contractor asked for a quote for an excavation job in Saline, Michigan. Diversified Excavating gained the contract for an assisted living center. His company’s work was well received, Ryan says, and “we’ve done several projects with Higgins in the last seven years.”

Dave and Ryan credit the company’s growth to durable relationships with general contractors, a dependable team and a strong economy. “We work for good general contractors that pay the bills,” Ryan says. “We never wanted to get this big, but here we are. We’ve found our happy medium and found out where we want to stay with our growth.”

Dave and Ryan are deliberate about keeping the company at about its current size. The economy is currently strong in Southeast Michigan, Ryan says, and companies aren’t afraid to spend money—yet there are no guarantees of continued growth. He’s seen companies grow big then struggle to keep employees busy.

Plus, if the company were to grow much bigger, Diversified Excavating would lose its personal touch. Dave and Ryan are involved with every job, from beginning to end, an essential value of their business.

“Dave and I are pretty much hands-on with all the jobs,” Ryan says.

Most job sites require both services, and offering them in-house keeps communication smooth and timelines on track. “We’re all in-house. There are less people on the site that way,” Dave explains. “Contractors are just dealing with two guys in the same company, instead of going through a company we hired and then to us. We don’t have to sub work out.”

The team draws on years of experience to solve the inevitable challenges that come from digging. “Nowadays, when you’re doing underground, if you run across anything, you mark it on the print,” Dave says. Yet there are still surprises underground that aren’t marked on plans. Dave, who is a third-generation excavator, recalls that when his grandfather was excavating a site in Ann Arbor decades ago, the job site was shut down for a month and a half because of a large bone that was uncovered.

“There are numerous obstacles in our work,” Dave says. “The job we’re on now, we were out there digging, pulling out a storm sewer that was being redesigned. We hit an underground detention system that wasn’t shown on the plans.”

With smaller obstacles, the team digs them out and keeps working. “Something of that magnitude, though, it was big. The detention system is a series of large pipes underground that collect and hold rainwater runoff. We had to make a phone call about that,” Dave says. A change order was required, and the Diversified Excavating team adjusted to new plans.

"We like keeping our hands in it so we know what’s going on. I still dig the main line and Dave still runs equipment when he wants a break from the office.” Ryan Moon, CEO and General Manager, Diversified Excavating and Site Utilities LLC

At the company’s current size, there’s no need for middle management, which suits Dave and Ryan’s style. “We like keeping our hands in it so we know what’s going on,” Ryan says. “I still dig the main line and Dave still runs equipment when he wants a break from the office.” Diversified Excavating projects include clearing land, installing and repairing underground utilities, building roads and parking lots, installing and repairing septic tanks, and hauling dirt—most anything that involves moving earth. The team has earned loyalty from a handful of general contractors that keep Diversified Excavating busy with car dealerships, hotels, retail centers and multifamily homes. Recent projects in Michigan include Suburban Ford of Waterford; Suburban Chrysler Dodge Jeep Ram of Ann Arbor; a new shopping center and mixed-use plaza on Haggerty Road in Livonia; Hampton Inn & Suites in Ypsilanti; and Best Western Premier in Saline.

General contractors return to Diversified Excavating again and again because the company’s size allows for reasonable production rates. “We don’t have quite the overhead of bigger companies,” Dave says, “and that puts us in a different bracket.”

One of Diversified Excavating’s most consistent clients remains Bloom General Contracting, Inc. “I hire them because they’re very, very reliable,” Bloom says, “and they go out of their way to accommodate our company’s needs, even if it’s an emergency or happens after hours or on holidays.”

Ryan and Dave are easily accessible, he says, and are in touch with each project. “They’re always there to perform services,” Bloom adds. “They’re really our go-to company.”

The work that Diversified Excavating performs plays a pivotal role in getting construction started. “We’re the first ones here,” Dave says. The rest of the construction process depends on the timeline and quality of the excavation process, placing pressure on the team to get the job done on time and correctly. “There’s a right way and a wrong way to do this work, and we do it the right way,” he says. “There are no shortcuts.”

Like many contractors, Diversified Excavating is at the mercy of uncontrollable weather conditions. Spring 2019 was particularly rough, with significant rainfall that delayed jobs and forced an assertive timetable throughout the summer. Michigan winters always slow down field work. The company keeps its 20 employees busy year-round with underground utility work in the winter plus with 30 pieces of equipment that require maintenance, repair and welding, Ryan says.

“For the past seven years we’ve kept everybody busy,” Ryan adds.

General contractors appreciate the company’s attention to its up-to-date and well-maintained equipment. Diversified Excavating invests in new technology and equipment that makes the work precise.

The company also provides 24-hour emergency service for area municipalities, taking care of watermain breaks as needed. “It’s not the bulk of our work, but it’s a good service to offer,” Ryan says. “So much infrastructure around here is dilapidated.”

Dave and Ryan grew up together in Michigan, and their camaraderie helps to set the tone at the company. “We get along great, and he’s only hung up on me once or twice,” Ryan jokes. Ryan relies on Dave to run the office, along with secretary and bookkeeper Karen Gumtow. “I trust Ryan like a brother,” Dave says. “He’s like my left arm.”

Dave and Ryan aren’t the only cousins at Diversified Excavating. Both of Ryan’s sons and David’s son work for the company as well, plus a nephew and two cousins. “Everybody’s got to eat,” Ryan says. “A lot of family works for us. We like it that way.”

Ryan and Dave plan on moving the business to a larger location, where Ryan can continue to purchase and collect equipment that will meet the company’s needs. “Our shop is small considering the size of our equipment, so we will need more room in the future if we continue our current path,” Ryan says. “And, of course, we will continue to provide the best service possible.”

Tyra Damm is a writer, editor and educator. In addition to her Who’s Who assignments she writes for The Dallas Morning News.

Reliability Runs in the Family

Jireh Sales LLC, based in Appleton, Wisconsin, is an independent masonry and landscape materials…

It all started with a backyard doghouse. Bob Adams, founder and owner of Milwaukee-based… 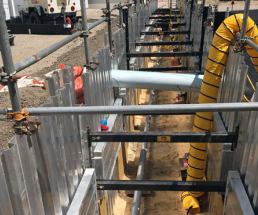 Sometimes, redundancy is a good thing, especially when considering safety at one of the country’s nuclear generation ... [Read More]

We’ve all heard it said, “Just because you CAN do something, doesn’t mean you SHOULD do something.” Such was the case... [Read More]

Based in Metro Detroit, jācapps has been in the app game since the beginning. Just one hundred days after Apple opene... [Read More]