Wes Benning is the Owner of Bennings Painting & Industrial Flooring.

Worker uses a vapor blasting method on the gates to historic Atwood Stadium in Flint.

Resiliency is a quality one expects with newly painted walls or industrial floor installations.

Both processes should leave surfaces neat and durable—free of any signs of previous adversity such as scrapes, dings, dents or scratches. Industrial flooring especially needs to be tough as nails in environments such as factories, bounce back from spills and be able to handle heavy equipment.

Bennings Painting & Industrial Flooring (Bennings) provides such resilient surfaces to commercial customers, such as car dealerships, hospitals, motels and schools. But the company not only provides resiliency; it exemplifies resilience through its own history.

As a company started by President and Co-Owner Wes Benning back in 1980, the Flint, Michigan-based firm has shown its perseverance as an organization—especially in recent years—overcoming challenges and achieving industry recognition, all while building legions of loyal customers.

Benning—whose family owned a lawn and garden business while he was growing up—started his company after temporarily living in Louisiana and working on an Exxon oil rig. Jobs were scarce, he says. He returned to Michigan and started the painting portion of his business, hiring on a residential painter. The company, with his wife, Michele Benning, as its Co-Owner, was incorporated in 1985.

In the years that followed, Benning learned more about epoxy floor coatings and expanded the business to include those services. Growth, new hires and relocations followed.

“In 1997, I moved to a building on North Saginaw Street that I owned for 23 years,” Benning says. At just under 7,000 square feet, the site was home to his company and its over 20 employees, and housed equipment and tools.

Then, an overnight fire in 2017 destroyed the structure and everything inside, including 12 company trucks. Clio and Mundy Township fire departments aided the Flint Fire Department in battling the blaze. The fire was investigated, but its cause was never determined.

“The fire was Saturday morning,” Benning says. “On Sunday we met there—it was a disaster with the smoke and water. We gathered what we could and moved to a temporary building 4 miles away, which we leased for a year.”

As best it could, the Bennings team went back to work the following Monday morning. “I give a lot of credit to Corrina Overmyer [current Office Manager] and all the employees, who started putting things back together so we could continue taking care of our customers and get employees back to work,” Benning says.

The company has done that and then some, hiring on three new full-time workers this year and bringing its team to 24.

Bennings’ customer-first attitude and hands-on approach has given it a name not only in Michigan, but in surrounding states as well. Benning, along with his flooring and painting Estimators, John Lester and John Niles, make it a point to stay connected to every job.

“One of the three of us is involved from start to finish,” Benning says. “I do several different things—some estimating, running the business, visiting job sites. We’re all involved. All three of us think the same on what aspects of projects are important. We support our crews that are out there working.”

What this collaborative type of approach offers customers is years upon years of expertise, all in one place. It’s a fitting dynamic for a company Benning calls a one-stop shop for services such as painting, vapor blasting, sandblasting, coating applications, floor finishing, concrete repair and polishing. Complete interior and exterior painting jobs are no problem. If there is a service his company can’t do, Benning says he knows someone who can, through the company’s network of trusted partners.

In addition to a broad sphere of services and rock-solid knowledge times three, Bennings takes on specialty environments as well. The staff is skilled in what is needed for Occupational Safety and Health Administration (OSHA) regulations, like requiring a facility to color code its gas, air, waste and water-delivery systems, for example. Benning and his team know what is needed when painting or installing flooring, whether in a sports arena, funeral home, car dealership, factory, museum or warehouse.

With over 50 flooring solutions for businesses in specialty industries, this skilled crew offers ideas based on what might be most helpful to customers—without selling them products or services they don’t need.

“We put our customers first,” Corrina says. “We give them a good, quality product and finishes…and we are there for the customer, not just in there to do a job. We want to make it look great and last.”

Bennings has had Kroger grocery stores as a client, for example. Non-skid floor treatments were installed for areas around the store’s recycling center, areas that could be slippery and unsafe, with rinsed-out bottles and cans constantly being moved in and out.

“In Kroger stores, they also have deli areas, which we call the ‘back of the house,’ “ Benning says. “In that kind of setting, a food environment, we recommend an FDA-approved type of seamless flooring so no bacteria can grow. Because it’s seamless, it’s easy to clean.” In industrial environments, like factories and plants, there are completely different needs and considerations. Some facilities may need safety-line striping or laminated, stenciled flooring. Others need chemical pits that keep hazardous substances at bay, and an experienced company like Bennings knows what specific epoxies will work in case of a leak.

“It’s all confined, with a cement wall,” Benning says of the chemical pits. “So that if the factory does have an unfortunate accident of some sort and it leaks, it doesn’t get into the drains. The coatings are there, so it’s sealed. But then we have to be sure the chemicals don’t destroy the coatings we put on.”

Benning also tells of the company’s ability to do maintenance cleaning at sites that have been painted or have had flooring installed, to do touchups or remove rust. Its services are valuable to its clients in that they are varied and, as Benning says, “done right.”

The firm is also known for taking on complex challenges. A case in point is the renovation of Atwood Stadium at Kettering University in Flint. The stadium, built in 1929, was renovated in 2015, but it had 39 original steel gates that were badly in need of a facelift. “They were in dire need of paint. They were rusty and needed welding work, too,” Benning says. “We took them down, brought them to our facility and vapor-blasted them—a new way of doing blastwork—and painted to protect them from weather and other elements.”

With the completed, like-new steel gates rehung at the stadium, there are other signs of Bennings’ commitment to excellence as well, such as the industry recognition it received in February—a 2018 Sikafloor Projects of the Year Decorative Flooring award.

Sika Corporation, which makes flooring and wall systems, chose Bennings’ project at Orion Animal Hospital in Lake Orion, Michigan, where the company’s crews installed decorative flooring. Benning says his employee, Lester, did a full consultation with the animal hospital’s owner, who had originally wanted tile. “John said we could do different epoxies with urethane coating and got her interest,” due to its cleanability among other benefits, Benning says. The result was both durable and attractive.

“We are pleased to welcome [Bennings] to the elite level of the industry,” said Stew Snoddy, Senior Vice President of Sika Corporation’s Flooring Division in a press release. “They have shown themselves to be the best in the business.”

What has kept the company in such great standing with its customers, says Benning, is that they know Bennings Painting & Industrial Flooring will do its very best on their behalf.

The first thing Eric Vesel, co-owner of Vesel Contractors, will tell you is that his is a “local”…

Honing the Tools of the Trade 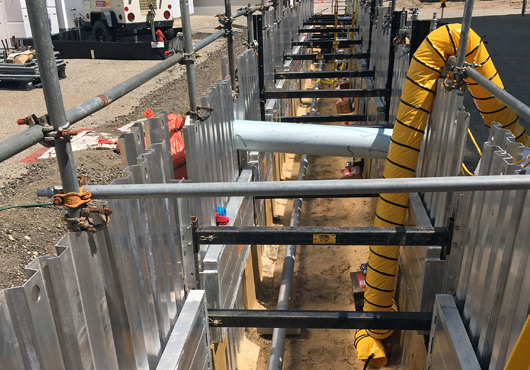 Sometimes, redundancy is a good thing, especially when considering safety at one of the country’s nuclear generation ... [Read More]

We’ve all heard it said, “Just because you CAN do something, doesn’t mean you SHOULD do something.” Such was the case... [Read More]