Grisselle Supriana (right) says it was challenging to break into the landscaping industry as a woman. She initially had her husband, Hector Calicio, network on her behalf until she decided she could overcome the adversity and find clients to work with her.

GAVASHA, Inc.’s largest project, which Grisselle is most proud of, was to clean a 35,000-sq.-ft. building, including 100 windows, post renovation, in one day.

Some people would rather keep their hobbies separate from their day jobs. But for Grisselle Supriana, the community’s support of her landscaping hobby helped it grow into a business that’s diversified over its first several years and given her the opportunity to establish deeper roots in her adopted home state of Florida.

This year, Grisselle’s company, Kissimmee-based GAVASHA, Inc., is rebranding to reflect the services it has evolved to offer. What began as a landscaping company in 2012 has expanded to include a wider range of beautification services, from landscaping to janitorial, repairs and general property management. This is a result of connecting with the Orlando-area community and listening to what customers want.

A Hobby Grows Into A Business

GAVASHA—which is an acronym that represents the first names of Grisselle, her children and husband—got its start after the family offered to clean up the back of its church’s property for an upcoming event. They cut tree branches, mowed the grass, pulled weeds and created a plan for planting trees and flowers to further beautify the property.

“Members of the church liked what we did and asked us for advice and help with their yards,” Grisselle remembers. “Some asked if we could take care of their yards because they’re too busy with work.”

For Grisselle, this wasn’t new. Born in Puerto Rico, she spent her childhood in the Virgin Islands and believes that’s where her good instincts for natural beauty originated. She moved to Rhode Island at age 11 and, as an adult, her landscaping hobby began there.

“We used to have a lot of elderly neighbors. I would go to their houses with my kids and help pick weeds and do other landscaping work. We always liked to volunteer and do for others what they couldn’t do for themselves.” Grisselle says. “What was basically a hobby and an after-school project to do with the kids turned out to be experience for a business.”

Later, the family moved to upstate New York. Grisselle says that’s where tourists and others who drove by would frequently stop to comment on the beautiful blooms she planted along the sidewalks. Neighbors remarked that they loved the flowers that were unlike anything else in the area.

So, when a growing number of her fellow churchgoers in Florida were interested in her landscaping abilities, Grisselle decided it was time for the former social worker to incorporate her business.

For Clients: ‘One Less Worry’

GAVASHA began to change shape when clients inquired about services beyond landscaping.

“One client asked if we could watch their property while they went out of town to deal with family issues,” Grisselle says. They agreed she would do it as a favor. She would check on the house and send photos of the inside, noting any concerns. The client was so pleased that she asked if she could keep hiring GAVASHA for that service and encouraged Grisselle to add it to the company’s official offerings, telling her, “Why wouldn’t I trust you with the inside of my property if I trust you with the outside?”

Over time, similar inquiries caused the company to branch out. Today, Grisselle’s team of six employees and three contract workers pride themselves on beautifying commercial and residential environments, inside and out, while relieving the clients of stress related to property management.

Across Osceola, Orange, Polk and Lake counties, the company’s clients vary widely and include real estate agents, contractors, charter schools, financial institutions and churches. Grisselle hopes to attract to her client list investors who live out of the area but need a reliable company to tend to their properties.

She says the ideal client for her is “one who wants to forget about the side of the job that we take care of. We don’t want to put more pressure on clients; we want them to count on us so that what we do is one less worry on their mind.”

Clients can hire GAVASHA on a schedule that works best for them, whether it be weekly, biweekly, monthly, semi-annually, annually or one time.

And, Grisselle says, her team is up to any task.

Their biggest project so far is one she is particularly proud of. They had one day to clean 35,000 square feet, including 100 windows, after a construction renovation. When it was done, the client was so pleased, they told Grisselle to expect more jobs from them.

“Six of us started early in the morning and divided the work. Everyone did their part and with dedication, we got it done in about eight and a half hours,” Grisselle says. “We’re not afraid of anything now. Nothing too clean or too dirty will keep us out.”

She laughs as she recalls crew members on each side of the windows seeming to follow and mime one another.

‘They Can Count On Us’

Grisselle says everything about GAVASHA is family- and community-oriented.

Her six children are informally involved in the business, each one specializing in a particular area. For example, one helps with business management and training while another focuses on legal issues.

The whole family convenes when big business discussions need to happen, which Grisselle says has been helpful for the company’s growth and development. And the family members help bring out each other’s strengths and support one another.

The inclusive mentality extends beyond her biological family too. “Our employees aren’t just employees,” Grisselle says. “They’re part of the family.”

And the same for clients. “A lot of our success has to do with how we’re so open with our clients and how we treat them as family. If they have an issue, they can count on us to help.”

The company proved that during the pandemic.

“We had a couple of clients that couldn’t afford our services and it was between paying the electric bill or paying for the services we’re providing or having a meal, and we said, ‘You’ve been with us for so long, it’s time for us to give back to you.’ We then gave them six months of free services,” Grisselle says. Knowing the past year has been tough for a lot of people, her company is particularly focused on meeting clients where their budget is.

This kind of goodwill is integral to her vision for GAVASHA and how she wants the company to be a strong support for the community.

“Wherever there’s a need, we want to be there to help out and be a support system. We don’t want the business just to grow,” she says. “We see a lot of people in the community trying to make something out of themselves. For example, a young couple gets married and they want to invest in a property but they don’t have that support system of someone taking care of the property while they focus on something else. We want to be that company they can count on to back them up and help them out.”

GAVASHA is also heavily involved in organizations that are making a difference in the community. Grisselle is hesitant to talk about her company’s philanthropy because she feels that doing the work and caring for one another is what’s important, not praise for the work. But GAVASHA team members volunteer with area food pantries, help out with church services as needed and are active with numerous organizations, including St. Cloud Greater Osceola and Kissimmee/Osceola County chambers of commerce, Hispanic Chamber of Commerce of Metro Orlando and Prospera.

Finding the community within those organizations was key to Grisselle realizing her strength and success in running a woman-owned business in a male-dominated industry. Early on, she would send her husband, Hector Calicio, to meetings and networking events because some people wouldn’t take GAVASHA seriously with a woman at the helm.

“I’d be like, ‘In this century?’ ” she remembers, having been surprised by the discrimination. Eventually, she had enough and decided that there would always be competition. She started to get out as the face of the business.

“It was very intimidating and it was hard, but being active within the community itself helped. It showed its support system to me, and showed me that I wasn’t alone and there were other women struggling.

“It’s hard, but it’s not impossible,” Grisselle says of overcoming the gender discrimination. She’s seen many instances where company leaders have opted to work with her, then commented that her work style is more nuanced, detail-oriented and thorough compared with some male counterparts they’ve worked with. “You find these open-minded business owners that want to give you the opportunity, and they see that there are benefits to working with a woman.” 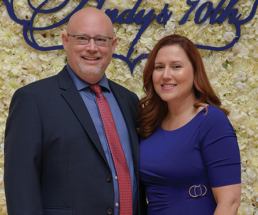