The focus of Dallas Contracting Co., Inc. has been on safe, efficient and cost-effective demolition solutions since John Sisto (left) and his late brother, Don, founded the company in 1987.

Owner John Sisto and his late brother, Don, jointly established Dallas Contracting Co., Inc. (Dallas Contracting) in 1987. Based in New Jersey, the company focuses on providing leading-edge demolition services in the tri-state area of New Jersey, Pennsylvania and New York. Tragically, Don Sisto died in a car accident in September 2020. This article is a tribute to him.

“Don was an irreplaceable partner without whom our success would not have been possible,” John says. “When we started doing residential demolition, Don drove the truck and I operated the equipment. When we were able to stop driving and operating ourselves, he became the ‘inside’ man handling purchasing, equipment maintenance and finances. I was the ‘outside’ guy. We both enjoyed our roles and responsibilities and were always on the same page, except maybe once every 10 years when we’d have a disagreement. Everyone should be this lucky.”

There was no contention between the brothers over naming the company either. Their mother came up with the “Dallas” in Dallas Contracting because she was a big Dallas Cowboys NFL football fan. John loved the team’s blue and silver colors, so he was sold on the Dallas idea. Apparently, so was the rest of the family: Though they grew up in the northeast, all four of John’s kids later graduated from Southern Methodist University in Dallas.

John and Don grew up in the family business of site contracting run by their father and uncle. That experience taught them what they did (and didn’t) want to do in their own company. “In my family’s business, chasing money was always a problem,” John says. “I noticed when you’re a site contractor that there’s always something to disagree about. Whereas, in the demolition business, there isn’t much to argue over. The work is defined, and demolition is the first trade in on a job and the first to be paid. If there’s a short fall, it comes out at the end, not the beginning.”

A friend of his father’s was a demolition contractor, and John used to watch his company raze houses on Saturdays. “It just seemed so clean and simple,” he says. “You knock it down and take it away. Those were the days when disposal was ridiculously cheap before all the government regulations pumped up the price from $5 a ton to $150 per ton today.”

Dallas Contracting has never had more than 20-25 employees with very little turnover. According to John, he and Don have always been hands-on owners. “Clients have always dealt directly with us, with no one in between, and our customers really appreciate that. It’s a very personalized service. We do our own estimating in-house and oversee every stage of the project. We do have foremen and superintendents, but ultimately, everyone always has my phone number and can deal with me directly. Consequently, I like dealing with companies where I can pick up the phone and speak to the owner.”

Employees stay with Dallas Contracting for a long time—an average of 12-15 years—typically starting out as laborers and working their way up through the company, growing with the job and the demolition business, as they learn to run the equipment and to do different tasks.

John points to key employees as examples. Carl Franzetti, Lead Foreman/Superintendent, has been with Dallas Contracting since the beginning. “He has an incredible touch,” John says. “Everybody thinks in demolition that we break it hard, that we wreck things. We don’t operate like that. Our equipment is pristine. We joke that he could pick up an egg from the ground without breaking it with one of these wrecking grapples.”

Other key staff include Adam Paszczyk, Superintendent, who started with the company more than 20 years ago when he was just 19, and Justin Wagner, Equipment Manager, who joined Dallas Contracting at age 27 and is responsible for keeping the company’s equipment in good working condition.

Dallas Contracting leverages three generations of contracting experience to fuel its success and guarantee customer satisfaction with innovative, cost-effective solutions. “We were one of the first demolition contractors to crush and recycle concrete on job sites over 20 years ago and to originally use a Brokk 160 electric robot for more efficiency, versatility and safety on select interior demolition projects,” John says. “We were ahead of the game with the Brokk 160 in 2013, but now you can rent the equipment. Technology and the internet have made contractors out of a lot of people.”

According to John, the company thrives on unique projects that require the skills it has acquired over the years and the high-quality, diverse equipment in which it invests. “We target work that leans toward the dismantlement and salvage side of the business, preferring to work with a select group of owners and developers on specialized exterior and interior demolition projects,” he says.

John says his team particularly likes complicated projects like moving large pieces of machinery, on-site concrete processing and crushing, plant shutdowns and closures, and removing structures attached to buildings the client wants to keep. “These things require more expertise and finesse than just taking a sledgehammer to a wall,” he says. “These are skills that come from having done this for the past 30-35 years.”

The catalyst for purchasing the Brokk robot was Dallas Contracting’s 2017 demolition of the New Jersey Star-Ledger newspaper printing plant in Piscataway, New Jersey. The project involved the removal of 60,000 square feet of second and third floor interior concrete and steel mezzanines.

Since the robot is electric, it can be used inside buildings and occupied space, with the operator positioned over 100 feet away in a safe place. If something in the structure should give way, one may lose a machine, but not a life. Using this approach, the company completed the work in just six weeks—and at less than half the cost. Using a traditional removal method would require the effort of six laborers with jackhammers for up to three months at much greater risk.

“My brother and I built this company on trust and respect,” John says. “It was a great partnership, a 50-50 effort to get where we are today. We were inseparable for a long time. I could not have done it without him. This article is dedicated to my brother, Don Sisto, and his memory.”

Carole Minor, an award-winning writer, editor and communications professional, has captured the stories of companies and their people for over 30 years.

Best Roll-Up Door, Inc.’s owner, Edward Choi, has been in the field for over 40 years manufacturing the highest quali... [Read More] 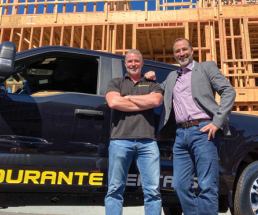