What do you see when you think of modular buildings? Maybe a temporary structure comes to mind—a portable classroom for a school overflowing with students, a mobile office for use during a building renovation, or extra storage. Design Space Modular Buildings, headquartered in Mission Viejo, California, sees modular buildings as more than temporary, utilitarian solutions. The company specializes in creating highly customized, permanent structures—ones that a passerby may not notice was built using modular buildings.

Founded in 1969, Design Space Modular Buildings has a long history of providing modular buildings and mobile office space for the commercial, health care, government, education and construction industries. The current management, including Paul McShane, President, has overseen the company operations for the last 20 years. During that time, the business has enjoyed exponential growth, expanding from one service market in Southern California to now more than 14 branches in eight states throughout the western United States.

“It’s been a busy 20 years,” says Peter Synn, Regional Sales Manager. “Much of the current staff across the corporate field and sales team has been with the company through the growth, which has helped solidify new markets and build loyalty with local customers.”

As Design Space Modular Buildings has expanded, many of its long-term customers have also grown alongside the company. One reason for this, Synn shares, is the company’s focus on customer service and custom solutions.

“We’re truly one of the few one-stop shop sources for all mobile, modular products while also providing custom solutions,” he says. When it comes to customer service, one of the company’s highest priorities is the timely execution of projects—a crucial component in the construction industry, Synn points out. The company takes a hands-on approach to ensuring projects run as smoothly as possible, which includes having designated onsite project managers.

Project managers evaluate the site where the installation will take place and ensure that the Design Space Modular Buildings team and the customer’s team are all on the same page.

“It helps to have those boots on the ground as a resource, especially for larger building installation jobs,” says Synn, adding that having a designated person on site helps to take the guesswork out of the building and installation process.

McShane is also involved in the day-to-day operations of the business. He regularly visits each location and is aware of all projects in progress. This helps cut through red tape if there are any roadblocks or significant changes needed to meet the customer’s timeline and budget, according to Synn. “If something needs his approval, he’s there in person to make sure it’s executed quickly,” he says. “We can get a quick turnaround from the president on down. That makes transitions quicker, which means less time needed to complete a project.

“That’s one of the biggest differences between us and other companies in the industry.”

The “design” element of Design Space Modular Buildings is where the team truly stands out, according to Synn, with unique and customized projects from start to finish. “Our competitors focus on volume. We focus on the customer, what their needs are, and executing their needs, no matter how unique or customized,” he says.

While other modular building providers often have a line of standardized modules to choose from, Design Space Modular Buildings can create individual designs for each customer—designing, constructing and installing everything from the building itself to the furnishings and, sometimes, even landscaping.

“Some customers come with their own designs. Others, especially in government or schools, who aren’t used to designing and constructing projects, rely on our expertise and decades of experience. We can handle everything from the engineering stage to final installation and assembly,” he says.

Synn refers to it as their “vision to reality” service, where they take customers’ initial ideas and transform those concepts into tangible buildings. He cites Crean Lutheran High School, a private school located in Irvine, California, which Design Space Modular Buildings has worked with throughout the school’s 10-year, multiphase development and construction process.

“Crean is one of our customers that has continued to grow with us as a company,” Synn says. “It’s one of our pride and joys.”

The team has designed and overseen each phase of the school’s construction, including its multistory administration building and classroom space. Today, the firm is completing additional classroom construction as the school grows and requires more space, particularly to meet social distancing requirements.

“We’ve continued to build more buildings for classrooms because of the pandemic,” Synn explains. “The school needs to create more space between students.”

What makes Crean unique is that the two-story modular buildings are so customized they don’t appear to be modular buildings at all. Instead, they look like a single traditional school structure, complete with large windows and a stone facade. The inside looks no different from a non-modular built school and features offices, classrooms, science labs, a performing arts space and open areas for socializing and studying.

It’s this ability to make a modular building unrecognizable that has landed Design Space Modular Buildings several projects for Hollywood, which often requires very specialized creations, according to Synn. The firm’s work even caught the attention of the television show “World’s Greatest TV Show,” which featured the company on an episode as the world’s greatest in modular buildings.

Vision for the Future

Synn credits the company’s highly skilled team with turning customers’ visions into reality. “They’re truly the experts,” he says of his colleagues. “That’s helped build trust in all the markets we support, and our customers are extremely loyal for that reason.”

Having been with the company only seven months, Synn admits he’s “one of the new guys” among a team that spans decades in the business. But he immediately recognizes how team members work together to contribute to the success of both the business and the customers they serve.

“Design Space Modular Buildings is a very flat organization. With that said, all levels of staff are engaged with each other for all midsized projects and up. We’ve built a family-like environment between staff members throughout the company.”

Employees are regularly recognized and rewarded for exceptional performance. Every year, the company’s top performers are awarded a trip for themselves and a significant other. Previous destinations have included Canada and Mexico. This year, in lieu of a vacation, top performers received a cash bonus. Rewarding employees, and making sure their hard work doesn’t go unnoticed, is something the company leadership focuses on, according to Synn. Even with more than 50 years of expansion behind them, there is still growth in the future for Design Space Modular Buildings. 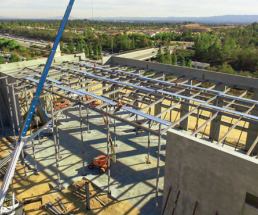 Over the past 39 years, Pomona-based Able Iron Works has developed a team of highly efficient experts in the structur... [Read More]